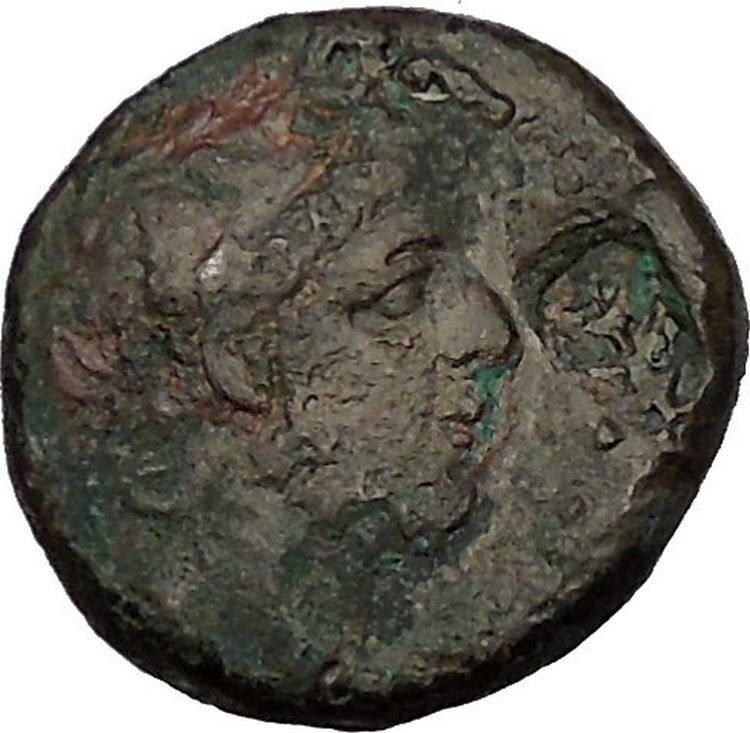 highrating_lowprice (21,590) 100%, Location: Rego Park, New York, Ships to: Worldwide, Item: 321994480768 Item: i53685 Authentic Ancient Greek Coin of: Seleukid Kindom Antiochos IX Kyzikenos - King: 113-96 B.C. - Bronze 17mm (4.76 grams) Tarsus mint, circa 113-96 B.C. Reference: HGC 9, 1247 Rare R2 ; SC 2353; SNG Spaer 2726; BMC Seleucid p. 93, 23 Bearded and diademed head of Antiochos IX right. ΒΑΣΙΛΕΩΣ AΝΤΙΟΧΟΥ / ΦΙΛΟΠΑΤOΡΟΣ, Athena advancing right, holding shield and spear over shoulder; monograms to left. You are bidding on the exact item pictured, provided with a Certificate of Authenticity and Lifetime Guarantee of Authenticity. Athena or Athene (Latin: Minerva ), also referred to as Pallas Athena, is the goddess of war, civilization, wisdom, strength, strategy, crafts, justice and skill in Greek mythology . Minerva , Athena's Roman incarnation, embodies similar attributes. Athena is also a shrewd companion of heroes and the goddess of heroic endeavour. She is the virgin patron of Athens . The Athenians built the Parthenon on the Acropolis of her namesake city, Athens, in her honour (Athena Parthenos). Athena's cult as the patron of Athens seems to have existed from the earliest times and was so persistent that archaic myths about her were recast to adapt to cultural changes. In her role as a protector of the city (polis), many people throughout the Greek world worshiped Athena as Athena Polias ("Athena of the city"). Athens and Athena bear etymologically connected names. Antiochos IX Kyzikenos, ruler of the Greek Seleucid kingdom , was the son of Antiochus VII Sidetes and Cleopatra Thea . Upon the death of his father in Parthia and his uncle Demetrius II Nicator's return to power (129 BC), his mother sent him to Cyzicus on the Bosporus , thus giving him his nickname. He returned to the Seleukid Kingdom in 116 BC to claim the Seleucid throne from half-brother/cousin Antiochus VIII Grypus , with whom he eventually divided the kingdom. He was killed in battle by the son of Grypus, Seleucus VI Epiphanes in 96 BC. Seleucid Empire Σελεύκεια Seleúkeia 312 BC–63 BC ↓ The Seleucid Empire in 301 BC. The Seleucid Empire was a Hellenistic state ruled by the Seleucid dynasty founded by Seleucus I Nicator following the division of the empire created by Alexander the Great . Seleucus received Babylonia and, from there, expanded his dominions to include much of Alexander's near eastern territories. At the height of its power, it included central Anatolia , the Levant , Mesopotamia , Kuwait , Persia , Afghanistan , Turkmenistan , and northwest parts of India . The Seleucid Empire was a major center of Hellenistic culture that maintained the preeminence of Greek customs where a Greek-Macedonian political elite dominated, mostly in the urban areas. The Greek population of the cities who formed the dominant elite were reinforced by emigration from Greece . Seleucid expansion into Anatolia and Greece was abruptly halted after decisive defeats at the hands of the Roman army . Their attempts to defeat their old enemy Ptolemaic Egypt were frustrated by Roman demands. Much of the eastern part of the empire was conquered by the Parthians under Mithridates I of Parthia in the mid-2nd century BC, yet the Seleucid kings continued to rule a rump state from the Seleukid Kingdom until the invasion by Armenian king Tigranes the Great and their ultimate overthrow by the Roman general Pompey . Frequently Asked Questions How long until my order is shipped?: Depending on the volume of sales, it may take up to 5 business days for shipment of your order after the receipt of payment. How will I know when the order was shipped?: After your order has shipped, you will be left positive feedback, and that date should be used as a basis of estimating an arrival date. After you shipped the order, how long will the mail take? USPS First Class mail takes about 3-5 business days to arrive in the U.S., international shipping times cannot be estimated as they vary from country to country. I am not responsible for any USPS delivery delays, especially for an international package. What is a certificate of authenticity and what guarantees do you give that the item is authentic? Each of the items sold here, is provided with a Certificate of Authenticity, and a Lifetime Guarantee of Authenticity, issued by a world-renowned numismatic and antique expert that has identified over 10000 ancient coins and has provided them with the same guarantee. You will be quite happy with what you get with the COA; a professional presentation of the coin, with all of the relevant information and a picture of the coin you saw in the listing. Compared to other certification companies, the certificate of authenticity is a $25-50 value. So buy a coin today and own a piece of history, guaranteed. Is there a money back guarantee? I offer a 30 day unconditional money back guarantee. I stand behind my coins and would be willing to exchange your order for either store credit towards other coins, or refund, minus shipping expenses, within 30 days from the receipt of your order. My goal is to have the returning customers for a lifetime, and I am so sure in my coins, their authenticity, numismatic value and beauty, I can offer such a guarantee. Is there a number I can call you with questions about my order? You can contact me directly via ask seller a question and request my telephone number, or go to my About Me Page to get my contact information only in regards to items purchased on eBay. When should I leave feedback? Once you receive your order, please leave a positive. Please don't leave any negative feedbacks, as it happens many times that people rush to leave feedback before letting sufficient time for the order to arrive. Also, if you sent an email, make sure to check for my reply in your messages before claiming that you didn't receive a response. The matter of fact is that any issues can be resolved, as reputation is most important to me. My goal is to provide superior products and quality of service.