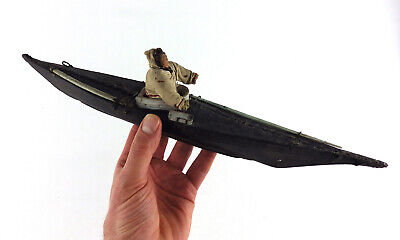 Seller: welsh-bridge-books-and-collectables ✉️ (6,063) 100%, Location: Shrewsbury, GB, Ships to: WORLDWIDE, Item: 255656766793 ANTIQUE INUIT & KAYAK~FOLK ART/MODEL~ARCTIC/GREENLAND/CANADA/ALASKA/ESKIMO INT.. Inuit & KayakHand-made model of an Inuit wearing an anorak ("annuraaq") seated in a kayak (ajaq).Not sure of exact date, but probably early 20th century.Made of wood (probably driftwood), cloth & possibly seal skin for kayak. Includes removable double-bladed paddle & other smaller wooden item. Inuit's hood can also be up or down. Measures 38cm long, 6cm wide and 8.5cm to top of figures head. Construction sound. A little dusty overall with small 'rust mark' to one sleeve and small hole to side of kayak, else fine. A striking antique example of Inuit Folk-Art.---Inuit (/ˈɪnjuɪt/; Inuktitut: ᐃᓄᐃᑦ 'the people', singular: Inuk, ᐃᓄᒃ, dual: Inuuk, ᐃᓅᒃ) are a group of culturally similar indigenous peoples inhabiting the Arctic and subarctic regions of Greenland (Denmark), Canada, and Alaska (United States). The Inuit languages are part of the Eskimo–Aleut languages also known as Inuit-Yupik-Unangan and also as Eskaleut. Inuit Sign Language is a critically endangered language isolate used in Nunavut.Inuit live throughout most of Northern Canada in the territory of Nunavut, Nunavik in the northern third of Quebec, Nunatsiavut and NunatuKavut in Labrador, and in various parts of the Northwest Territories, particularly around the Arctic Ocean, in the Inuvialuit Settlement Region. With the exception of NunatuKavut, these areas are known, primarily by Inuit Tapiriit Kanatami, as Inuit Nunangat. In Canada, sections 25 and 35 of the Constitution Act of 1982 classify Inuit as a distinctive group of Aboriginal Canadians who are not included under either the First Nations or the Métis.Greenlandic Inuit are descendants of Thule migrations from Canada by 1100 CE. In the United States, the Alaskan Iñupiat are traditionally located in the Northwest Arctic Borough, on the Alaska North Slope, and on Little Diomede Island.Many individuals who would have historically been referred to as "Eskimo" find that term offensive, and/or forced upon them in a colonial way; "Inuit" is now a common autonym for a large sub-group of these people. The word "Inuit" (varying forms Iñupiat, Inuvialuit, Inughuit, etc.), however, is an ancient self-referential to a group of peoples which includes at most the Iñupiat of northern Alaska, the four broad groups of Inuit in Canada, and the Greenlandic Inuit. This usage has long been employed to the exclusion of other, closely related groups (e.g. Yupik, Aleut). Therefore, the Aleut (Unangan) and Yupik peoples (Alutiiq/Sugpiaq, Central Yup'ik, Siberian Yupik), who live in Alaska and Siberia, at least at an individual and local level, generally do not self-identify as "Inuit". (Small extract of Wikipedia article)---The Inuit invented the qajaq (Inuktitut syllabics: ᖃᔭᖅ), a one person boat used for hunting and transportation, and propelled by a double-bladed paddle. Inuit and Aleuts used driftwood or whalebone to make a light framework, and covered it with stretched skins, made watertight with whale fat.Kayak means "hunter's boat" and it is perfect for hunting on the water. It's almost silent, making it easy to sneak up behind prey. If a white cloth is draped in front, the animals might be fooled into thinking that it is a drifting piece of ice - perhaps a "growler".These traditional "one man" boats were usually just that - "made to measure" for just one man's size and weight. When a person had fallen into the water or died from kayak hunting, it was often said that he had borrowed someone else’s kayak, and didn't have the same sense of balance.It was considered suicide to come out of the boat. There was no protection from the icy cold water, no buoyancy in heavy skin clothing. If you rolled over, you had to know how to roll right back up! Because of this property, the design was copied by Europeans and Americans who still produce them under the Inuit name kayak.---Inuit industry relied almost exclusively on animal hides, driftwood, and bones, although some tools were also made out of worked stones, particularly the readily worked soapstone. Walrus ivory was a particularly essential material, used to make knives. Art played a big part in Inuit society and continues to do so today. Small sculptures of animals and human figures, usually depicting everyday activities such as hunting and whaling, were carved from ivory and bone. In modern times prints and figurative works carved in relatively soft stone such as soapstone, serpentinite, or argillite have also become popular.Traditional Inuit clothing and footwear is made from animal skins, sewn together using needles made from animal bones and threads made from other animal products, such as sinew. The anorak (parka) is made in a similar fashion by Arctic peoples from Europe through Asia and the Americas, including the Inuit. The hood of an amauti, (women's parka, plural amautiit) was traditionally made extra-large with a separate compartment below the hood to allow the mother to carry a baby against her back and protect it from the harsh wind. Styles vary from region to region, from the shape of the hood to the length of the tails. Boots (mukluk or kamik), could be made of caribou or seal skin, and designed for men and women.As it is sometimes difficult to properly judge the look and condition of an item from the description and photos alone, please feel free to bid knowing that you can return the item post free if you are not entirely pleased with your purchase. Please do not hesitate to contact me should you have any questions.Combined shipping available at cost. Welsh Bridge Books & Collectables is a bricks and mortar shop located alongside the River Severn at Shrewsbury, in a beautiful 16th Century building housing three floors of interesting and eclectic books and collectables for sale. If you're in Shropshire please pop by and say hello! Thank you. Condition: Construction sound & sturdy. A little dusty overall with small 'rust mark' to one sleeve and small hole to one side of kayak, else fine., Region of Origin: Arctic, Product: Model, Age: 1900-1940, Primary Material: Wood, Original/ Repro: Original