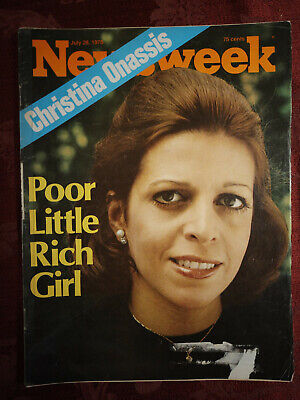 moremagazines ✉️ (52,408) 99.8%, Location: Pensacola, Florida, US, Ships to: WORLDWIDE, Item: 334330017144 NEWSWEEK Magazine July 28 1975 Christina Onassis Jaws Apollo Soyuz. Exclusive MORE MAGAZINES detailed content description, below! * NEWSWEEK Vintage News-week magazine, with all the news, features, photographs and vintage ADS -- Exclusive MORE MAGAZINES detailed content description, below! ISSUE DATE: July 28, 1975; Vol. LXXXCI, No. 4 IN THIS ISSUE:- [Detailed contents description written EXCLUSIVELY for this listing by MORE MAGAZINES! Use 'Control F' to search this page.] * This description copyright MOREMAGAZINES. 1 2 3 4 5 6 7 8 9 10 11 12 13 14 15 16 17 COVER: POOL LITTLE RICH GIRL: CHRISTINA ONASSIS. TOP OF THE WEEK: TRIALS OF AN HEIRESS: She may be the richest woman in the world, but Christina Onassis is also burdened with a wealth of problems. Glamorous as it may have been, her jet- set life has iardly prepared her to run the complex business empire that she inherited from her fabulous father, Aristotle, earlier this year. To make matters more difficult for the young Christina, the tanker industry upon which her fortune rests is going through its worst recession since the 1930s. Her personal life has been scarred by a series of tragedies, including a succession of deaths that wiped out her immediate family, and her relations with her stepmother, Jacqueline Kennedy Onassis, have always been strained. But whatever her problems, Christina will have to master the intricacies of the tanker business quickly if she is to carry out the intent of her father's carefully drawn will and preserve the wealth and power of the Onassis empire. (Newsweek cover photo by Lawrence Fried-The Image Bank.). JAWS-MANIA: It was part Hollywood hype, part pure summer escapism- but suddenly even the land- locked American heartland was scared witless of sharks. The source of the epidemic was the scare movie "JAWS"; the symptoms included saucer eyes, blanched faces, fear of water, a tolerance for standing on movie lines-and an insatiable appetite for spin-offs ranging from T shirts to shark teeth to political cartoons. BLACK BAG BOYS: The FBI agents always went in clean: no badge, no guns, no credentials. But in roughly 1,500 break-ins of mob hangouts, foreign embassies and the headquarters of extremist groups, they accumulated an awesome record of illegality over the years, and director Clarence Kelley's official disclosure of the record touched off a furor last week. Newsweek's An- thony Marro pieced together the story of the FBI's after-hours adventures- sometimes comic and sometimes dead serious. We had guys who, if they went bad, would be the best second-story men in the world," boasted one former agent. WHAT PRICE DETENTE? The two spacecraft nudged together, their two commanders shook hands-and a historic Soviet-American venture was under way. The link-up of Apollo and Soyuz (page 40) was another leap for mankin,d in space. But to many Americans it seemed only a small step for détente, and across the U.S. new questions were being raised about the price of rapprochement with the Russians (page 14). The man who brought the discontent to a head was exiled Russian novelist Ale ksandr Solzhenitsyn-a harsh critic of both the Kremlin and détente (page 45). NEWSWEEK LISTINGS: NATIONAL AFFAIRS: What price détente?. Jawsmania-the great summertime escape. A compromise on energy?. The FBI's surreptitious break-ins. MAC the Knife moves in on New York City. Back-to-Vietnam thoughts among the refugees. INTERNATIONAL: Confrontation in Portugal. Angola's tug of war. Egypt's "ultimatum". Israel's DEW line in the Sinai. India: the anti-Gandhi underground. China's extraordinary pottery soldiers. Britain: squatters' rights. From cold war to cold peace. JUSTICE: Joan Little's defenders. SCIENCE: The U.S-Soviet handshake in space. IDEAS: The real Alexander Solzhenitsyn. LIFE/STYLE: Back to farm and fold. NEWS MEDIA: Covering the Apollo-Soyuz story. BUSINESS AND FINANCE: The cost of economic recovery. Last-minute rescues on the labor front. The spreading corporate-payoffs scandal. Joe Namath the perfume salesman. Profits-down but not out. Poor little rich gid Christina Onassis. (the cover). An's will. MEDICINE: Sonar for the blind. The AMA's "Sore Throat". THE COLUMNISTS: My Turn: Marshall Frady. Pete Axthelm. Paul A. Samuelson. Bill Moyers. THE ARTS: ART: The allure of Japonisme. BOOKS: "The Annotated Dracula," by Bram Stoker. Bob Considine's life of Armand Hammer. Five feminists who fought the Czar. MUSIC: The Bolshoi Opera in America. Minnie Riperton-Stevie Wonder's angel. * NOTE: OUR content description is GUARANTEED accurate for THIS magazine. Editions are not always the same, even with the same title, cover and issue date. This description copyright MOREMAGAZINES. 18 19 20 21 22 23 24 25 26 27 28 29 30 31Standard sized magazine, Approx 8½" X 11". COMPLETE and in VERY GOOD condition. (See photo) A great snapshot of the time, and a terrific Birthday present or Anniversary gift! Careful packaging, Fast shipping, ALL GUARANTEED -- Condition: Very Good, Condition: SEE BELOW for MORE on CONDITION and CONTENTS: Authors, illustrators, photos, subjects, ads, details on the condition and MORE are listed in our exclusive *searchable* content descriptions! MORE MAGAZINES guarantees all content, condition, and fast delivery. 100% satisfaction GUARANTEED!, Topic: News, General Interest, Publication Name: Newsweek, Publication Frequency: Weekly, Publication Month: July, Publication Year: 1975, Language: English