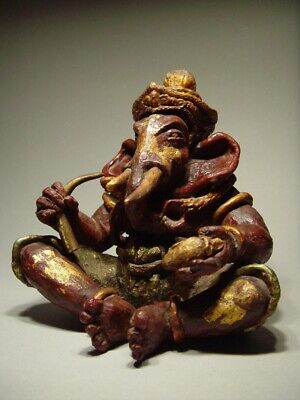 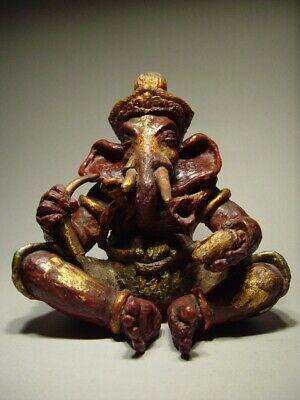 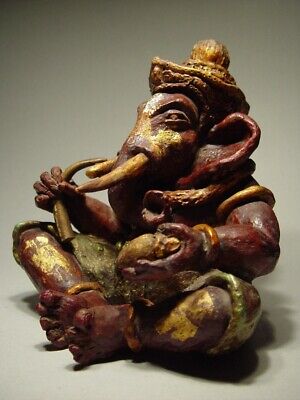 Seller: siamgalleryco ✉️ (599) 100%, Location: Bangkok, TH, Ships to: WORLDWIDE, Item: 155039833350 RARE TERRACOTTA STATUE OF THE HINDU GOD 'GANESHA', FOLK ART. 19/20th C.. SIAM GALLERY Co. INVESTMENT LEVEL ANTIQUITIES, COLLECTIBLES, AND DECORATIVE ART BURMA. CAMBODIA. CHINA. INDIA. INDONESIA. JAPAN. LANKA. LAO. THAILAND. TIBET. BIG SAVINGS - PRICE REDUCED FROM $5,889.99 - GREAT VALUE. Seated Hindu Deity Ganesha: Title: Antique. Extremely Rare. Seated Hindu Deity Ganesha. Terracotta Folk Art. 19/20th C. Overview: A stylistic representation of creative works, bearing the distinguishing hallmark of Folk Art, somewhat exaggerated in style, yet simplistic in its form. The sculpture was acquired from a temple precinct in central Thailand, measuring 7.5 inches (19.05cm) knee to knee, and 7.75 inches (19.69cm) in height. In Indian mythology, Ganesha is the God of the universal popularity among Hindu's and portrayed as an idol with the body of a man and the head of an elephant, having only one tusk. Ganesha's head is symbolic of the wisdom of the elephant and represents man's eternal striving towards integration with nature. Description: A masterfully conceived example of Lord Ganesha, the elephant-headed deity from Hindu literature and mythology, son of Shiva and Parvati, known as the 'Remover of Obstacles', and god of success and fortune. xxxx The deity is modeled in traditional archaic style, depicted seated cross-legged in the Lotus or 'padmasana' pose. The figures right hand is rich in a symbol of gesture while simultaneously holding his own broken tusk, as the left hand holds the Conch shell. Across his left shoulder and about the waist is his sacred thread, the divine serpent ‘Upavita’, coiled in the form of a cobra snake. xxxx Ganesha is shown unclothed above the waist, dressed in typical royal attire, adorned in jeweled and floral ornamentation, wearing a knee-length 'Chawng Khun' wrap secured by a decorative belt, complemented by an elaborate frontal sash extended at the front of his garment. Ganesha's well-proportioned head is beautifully rendered with a slight tilt, wearing a floral headdress above an interconnected 'Diadem' crown. The image is further adorned throughout with elaborate armlets, bracelets and anklets, while the reverse is highly detailed showing the intricately carved lines of his garment. Origin:xxxxxxxxx Temple District, central Thailand. Period:xxxxxxxx 19th to 20th century. Composition:xx Solid terracotta clay , hand sculpted and hand painted, w/ aged patina. Dimensions:xxx Height: 7.75 inches (19.69cm). Observation:xxx Excellent Condition, with minor flaws and surface abrasion. Please view detailed photos for overall quality and minor imperfections of the item. Shipping: Item(s) shipped direct from Thailand worldwide, through Thailand Post Register Airmail (3-4 weeks) or Sea Freight (4-5 weeks) depending on size. All items shall include insurance, and will be handled with the utmost care and professionally packed. Purchaser is responsible for any applied Customs Duty Fees, Taxes, and related charges, which may be assessed by the buyer's government. Shipping Calculations: Cost of shipping is determined by the weight of the packaged item, plus the cost of the packing supplies, plus the registration & export license fees (applicable on all religious artifacts). Please keep in mind that Ebay and PayPal take a combined commission fee of almost 15 percent, automatically deducted from the shipping charges, which we have offset in the shipping total. We do not profit on shipping fees and do our best to arrive at the most accurate and fair price for all parties involved. NOTE: Being a religious artifact, a permit will need to be obtained from the Archaeological Department of Fine Arts, certifying this article is allowed to leave the country of Thailand. Expect a one week delay in shipping. Terms: Pay Pal is the accepted method of payment, and must be received within 24 hours of the auction end: includes a 14 day return policy, item must be returned in the exact same condition as sold. Return shipment must be paid by the purchaser. Guarantee: 100% Customer Satisfaction Guaranteed - We are extremely confident that all items presented from our collection are genuine antiques. In the event the authenticity of an artifact is disputed, please contact us immediately. We will refund the respective purchase price, less a 10% (ten percent) re-stocking fee, provided that the item is returned in the original condition, and at the customers expense, together with copies of the respective receipt (s) and supporting evidence from a suitable qualified authority, certifying that the item we have sent you is not antique. Siam Gallery Co. reserves the right to contest a customer’s assessment in the event that proof is available to support the pieces authenticity. Please e-mail us with your questions and bid with confidence. THANK YOU FOR YOUR INTEREST IN OUR GALLERY OF FINE ART. "> (c) SIAMGALLERYCO - All Rights Reserved. COPYING THIS PAGE AND ALL ITS CONTENTS IS FRAUDULENT AND VIOLATES EBAY POLICY AND WILL BE REPORTED. Track Page Views WithAuctiva's FREE Counter Track Page Views WithAuctiva's FREE Counter Condition: PLEASE VIEW ADDITIONAL PHOTOS IN THE 'DESCRIPTION' PAGE BELOW., Primary Material: Porcelain & Pottery, Type: Ganesha Statue, Color: Multi-Color, Original/Reproduction: Antique Original, Featured Refinements: Ganesha Statue