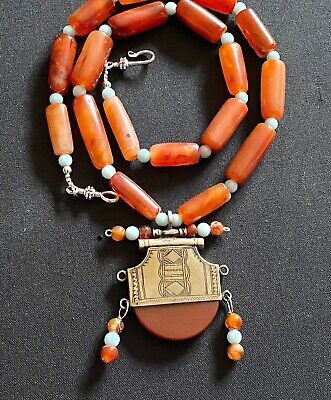 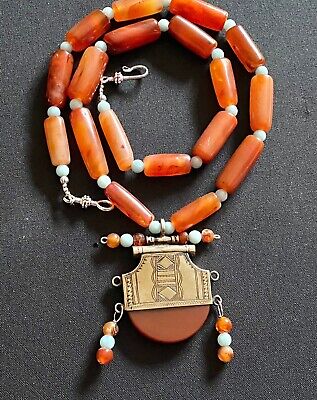 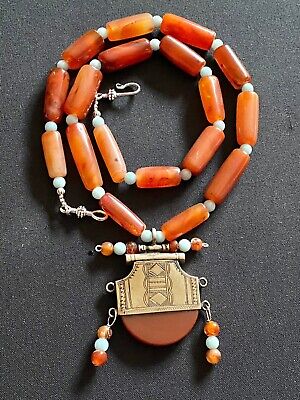 Seller: mimi033 ✉️ (363) 100%, Location: Malden, Massachusetts, US, Ships to: WORLDWIDE, Item: 284523990478 Tuareg Berber vintage fibula with Amazonite & Idar Oberstein Carnelian necklace.. Tuareg Talhakimt fibula berber old southern silver vintage Moroccan handmade pendant with Amazonite and vintage Carnelian necklace.Beautiful handmade unique vintage one of kind piece of jewelry. Made with an old Moroccan Berber silver fibula southern talhakimt pendant purchased from a vendor in the Atlas Mountains of Morocco a few years back while exploring the Amazigh. This unique pendant measures over 2” in height by 2” in width and has 35mm x 14mm large old oval genuine carnelian gemstone slab detail. The various charms consist of 6mm carnelian and amazonite gemstones. This is beaded with an old supply of tubular bullet shaped vintage Idar Oberstein carnelian beads measuring approximately 28mm x 13mm. Separated by round 6mm amazonite gemstone beads. Finished with a Bali style silver hook clasp closure. This necklace measures 26” in total length.Carnelian is said to aid health, long life and good fortune. It is also said to help one fulfill ones innermost wishes if worn near the heart. Warming and cleansing the blood and kidneys this stone works well in the orange and yellow. This stone can also be used to stimulate appetite, passion, emotions and physical energy. Like the unexpected fire of a sunset, or the first flash of autumn brilliance, Carnelian captivates. Its bold energy brings a rush of warmth and joy that lingers, stimulating and empowering. Known as a stone of motivation and endurance, leadership and courage, Carnelians have protected and inspired throughout history.A glassy, translucent stone, Carnelian is an orange-colored variety of Chalcedony, a mineral of the Quartz family. Its color varies from pale pinkish-orange to a deep rusty brown, though it is most known for its brilliant orange and red-orange crystals. Its name comes from a Latin word meaning "flesh."In antiquity, as well as today, Carnelian is believed to help timid speakers become both eloquent and bold. Ancient Warriors wore Carnelian around their neck for courage and physical power to conquer their enemies. In Egypt it was worn by master architects to show their rank of builder, and alchemists of the Middle Ages used it as a boiling stone to activate the energy of other Chalcedonies. The ancient Egyptians called Carnelian "the setting sun." In its orange hues, they identified it with the receptive or passive female energies, and associated it with the fertile menstrual blood of the mother goddess, Isis. In its red, red-orange to reddish brown shades, they considered it the active male energy stone, recognized by its glowing vibrant color. Carnelian is traditionally worn to enhance passion, love, and desire.Amazonite is somewhat rare, yet it was widely known, and highly valued by the ancients. They used it to dispel negative energy, aggression, instill self- confidence, clarity, kindness, leadership, practicality, and communication on the physical and spiritual level. It soothed the body, mind, and spirit. It was also used to boost confidence and create hope. Some believed it created prosperity, so some merchants put it over the door to bring in business. Like waters deep and ancient, Amazonite beckons in captivating shades of turquoise-green, promising to soothe the spirit and calm the soul. Its energy is as powerful as the river for which it is named, and as bold as the legendary women warriors with whom it is connected, yet it tempers aggression, tames the irrational, and stills the disquiet. It provides harmony and balance.Called the Stone of Courage and the Stone of Truth, Amazonite empowers one to search the self and discover one’s own truths and integrity, and to move beyond fear of judgment or confrontation with others to live in alignment with those beliefs and values. It provides the freedom to express one’s thoughts and feelings, and to set strong and clear boundaries, both internally as self-discipline, and externally on what one is willing to experience or in defining personal space. As a metaphysical healer, Amazonite has been used in jewelry and cut into beads since the time of the early Mesopotamian cultures. Well-known in India, Egypt, Sudan and Mesopotamia, it was a popular amulet stone and was once used as decorative material for building facades. It was carved and cut into tablets for the Egyptian funerary text, and an Amazonite scarab ring was found among Tutankhamen’s treasures.Amazonite was also worn as jewelry in pre-Columbian South and Central America, and was believed to have adorned the shields of the semi-mythical Amazonians, a formidable tribe of female warriors thought to live in the 10th century B.C. They also used Amazonite medicinally to heal wounds and illnesses of all kinds. The conquistadors prized it for adornment and its ability to be carved into cult objects. Amazonite is named for the Amazon River in Brazil and the lush jungle region surrounding it where the original “green stones” were discovered. Condition: New without tags, Type: Necklace, Secondary Stone: Carnelian, Main Stone: Amazonite, Number of Diamonds: None, Antique: Yes, Shape: Oval, Closure: Hook, Occasion: Anniversary, Birthday, Christmas, Engagement, Graduation, Mother's Day, Valentine's Day, Wedding, Main Stone Color: Orange Brown Red, Metal: Berber Silver, Item Length: 24 in, Jewelry Department: Fine, Vintage: Yes, Main Stone Treatment: Not Enhanced, Department: Unisex Adult, Main Stone Shape: Bullet Barrel, Style: Beaded, Pendant, Base Metal: Morrocan Old Silver, Features: Stackable, Number of Gemstones: Amazonite And Carnelian, Handmade: Yes, Chain Type: Beaded, Ethnic & Regional Style: Amazigh, Main Stone Creation: Natural, Signed: No, Color: Blue, Sizable: Yes, Material: Genuine Gemstone, Certification: Amazigh, Brand: Berber Amazigh, Metal Purity: Berber Silver, Customized: Yes, Original/Reproduction: Original, Country/Region of Manufacture: Morocco, Country of Origin: Morocco